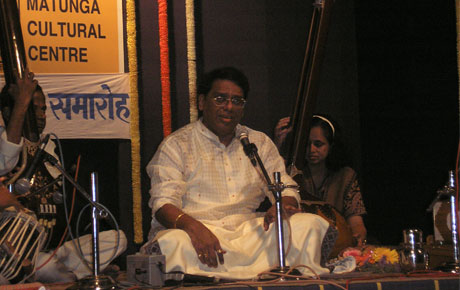 Born in the family of a classical vocalist, Vinod Digrajkar received his initial training in music from his father Pt. Sudhakarbua Digrajkar, Kolhapur, the city where he grew up, has been the fountainhead of the Jaipur style of singing in Maharashtra obviously Vinod went for more training in this style to Pandit Nivrittibua Sarnaik. This created in him a new desire to explore wider horizons of music and also reprieved training from Pandit Jeetendra Abhisheki. His style today brings out an aesthetic blend of all these together with his individual creativity.

He is a qualified Civil Engineer, a builder and developer by profession and has constructed near about 200 flats in Kolhapur city. Each building has named by a raag in classical music. He devotes his time equally to the pursuit of music. He is a "A" graded artist of the all India Radio and given performances at a number of conferences on Radio and T.V. His repertoire includes a wide variety of less heard Raags. He is equally at ease with light music varieties like Marathi stage songs, Bhavgeets and devotional songs.

A Melodious voice, imaginative artistic perception, complex patterning of the Taans in the Jaypur style are some of the major facets of his singing. Alurkar Music House at Pune has published his two Cassettes. He has been awarded gold medal in All India Radio Competitions for the year 1977. He is an artist of Sangli A.I.R. & Performing for last 27 years. He also performed in Sunday and Tuesday night concerts of A.I.R.